So i’m making a few catch-all trays for an upcoming local craft fair to raise money for a local charity for kids in our community that don’t have much in the way of food an such. I’ve designed a couple round trays and in vcarve they loook fine, and in Openbuilds they look fine. however, they seem to have things off when it is carving them out. The bowl bit carving isn’t cutting them round. I’m sure it is operator error in some fashion, just not sure what I’ve done wrong. The first catchall is just a 6in round circle, only it didn’t get cut out round with the bowl bit. the second is a 4 section round serving tray that will have a small area in the center for a dipping dish. but you can see the right side, both upper and lower quadrants on the board are out of whack and according to the “image” from openbuilds it should be perfectly matched. Now, I did have an issue where the router mount on the z-axis came loose I assume from all the vibration and the router bit slipped out. But I fixed those things and re-ran the job and all the ones that are square or at least not “round” seem to be coming out just fine. The rounded ones seem to be coming out all wonky. 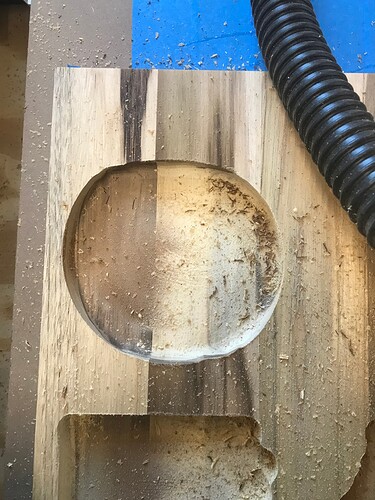 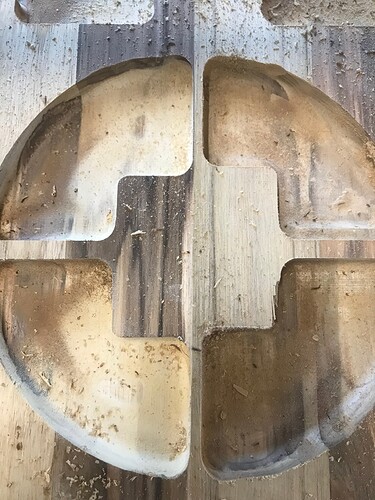 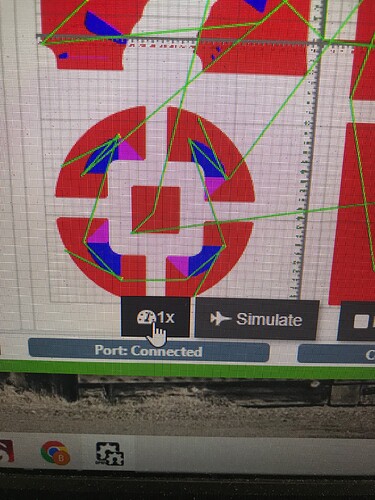 Sounds like it could be an issue with the lead screw backlash assemblies loosening - this video shows the X axis being worked on, but the Y axis repair is similar.

If you bought a CNC Router or a Laser Engraver from YoraHome, then this is the group for you. You can ask any questions about our products and discuss CNC related topics. Feel free to share your...

Basically, it’s causing the movement in one direction to have some play in it

If you measure your square openings, there’s a possibility that the dimensions may be slightly off as well - just not as noticable, since the machine isn’t trying to change direction for the curve

Thanks, Jim, I’ll check on the x-axis. I did find some other items loose so that maybe the root cause of my circle issue.

ok, so the x-axis was tight, so not that issue, however, It may be an issue with the right side y-axis. I got to looking at it and measured, the right side was nearly half an inch off from the left side. I re-set it, but after just jogging the machine back and forth a few times, the right side is again off by a little bit. It seems something is letting the right side “slip” (not sure how else to describe it). Is there supposed to be some level of difference in the right and left side of the axis? But it seems that maybe part of my issue, but it seems odd that after setting them to the same distance they so quickly slip again after jogging back and forth a few times. It doesn’t seem to be as “noticeable” when it is doing square shapes but if it has to do any rounded shapes is when it really shows up.

I’m going to assume a potential issue with the backlash assembly on the right side, but given my limited experience with those parts, what am I looking for to see if it is an issue?

They should stay aligned - so if they are off, that’s definitely part of the issue.

The same exact thing shown in the video of the X axis is present on both Y axis - if you can grab the gantry and it moves with that bit of “clunk” (shouldn’t move at all), then you likely have a loose backlash nut.

You can generally see them if you peek in behind the side plates - one end of them has a spring, the other doesn’t. The side without the spring needs to be screwed tight to the block - the long arm of an allen wrench will allow you to reach it without major disassembly. 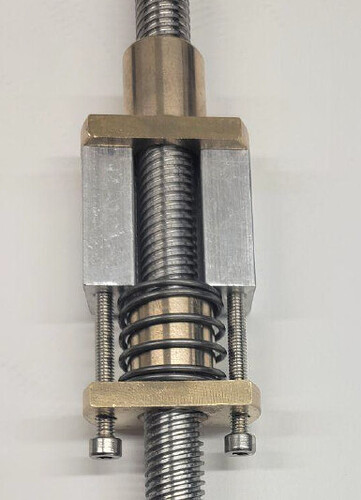 The top side in this pic is the end that should be screwed tight to the block.

The issue you’re describing sounds exactly like this issue

So here is what I’m seeing on the backlash assembly on the right side y-axis. It looks like it is tight. There does appear to be a gap between the bronze piece and the block on the spring side based on the above picture. 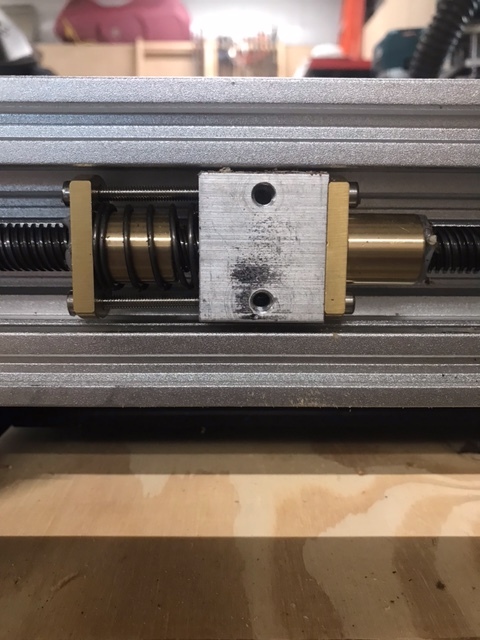 That pic looks right at first glance - but would usually expect the spring loaded one to NOT be all the way against the screw heads - if you try to move that back and forth by hand, will it move? If so, the threads inside may be stripped out.

Also, take a good look at the couplers - should be firmly together, and make sure there’s no slippage. There were some couplers that just had the “pinch” screw, and not a second set screw to hold against the shaft. If you need replacements on those, let us know. 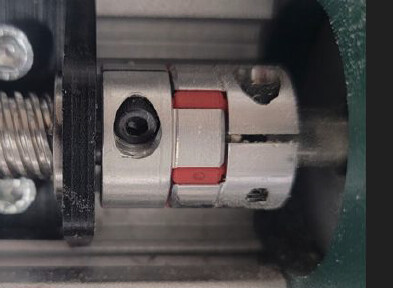 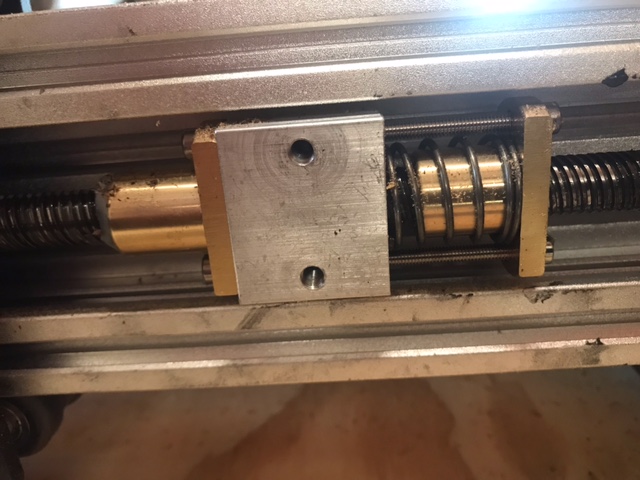 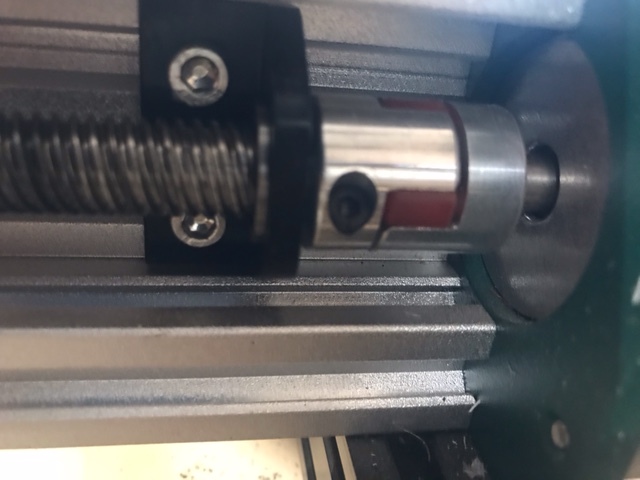 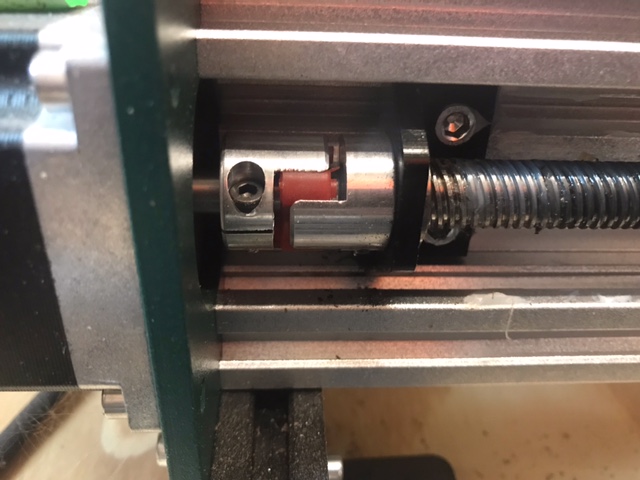 Any ideas on the issue, Jim? The backlash assemblies are tight (i.e. I can’t move them by hand). I don’t know why the spring side is all the way against the screw heads, but it doesn’t seem to have any play in it. Could that little bit of gap on the left coupler be part of my issue? I’m at a loss on what to do at this point and I have a few orders I need to be filling, but right now my machine is still disassembled till I can figure out the issue. I don’t want to put it get together only to have to tear it apart again for the fix. So if there are any other ideas on what I need to try or look at, please let me know. I don’t want to mess up any more projects because the gantry is getting out of kilter on me.

I would make sure the couplers are seated properly and both set screws tight for sure.

The coupler gap shouldn’t impact that movement - if anything, it would only give you about a mm of play.

Closely inspect the wiring - with the X gantry removed, and the machine powered up, try to jog the Y axis, and ensure that both motors are moving at the same time consistently. Want to make sure that one isn’t lagging, or shuddering - have seen where a single loose wire can cause the motor to rotate in the wrong direction for a moment, then go in the intended direction.

Want to rule out any wiring/configuration issues

Jim, thanks for the idea of running the y-axis without the x-gantry, that showed the problem pretty quick. It seems the left side coupler was loose enough that when turned by the motor it would slip about 1/2 turn before engaging the bar. It wasn’t visible with the gantry and it made it seem like the right side was the issue so I was focused on that side. I was able to tighten down the coupler and now it is engaging properly and everything seems to be moving in sync now. Thanks for all the help. Shawn, thanks for mentioning the set screws as well, they appeared tight but apparently not tight enough