So a few weeks ago, a friend who makes her own cheeses asked me to create a “stamp” she could put into her cheese molds to stamp her “logo” into the cheese block. I took her logo, put it into V-carve (vectric) and carved it out. It came out pretty good. Used a v-carve bit (1/4 60 degree v-bit) to do the inner portion where the text and the logo was. 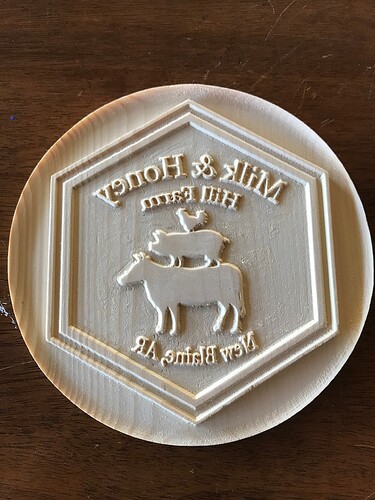 She was able to use it, but based on her tests it would be best if the text and logo were a bit deeper (the image above believe that was at 1/8 of an inch deep). Which brings me to my problem. I loaded up the same project, resigned the outside circle as the original one was about 1/8 inch to wide, removed the 3d bowl part since by the time we had trimmed it to fit the model the bowl part wasn’t even registering. I changed the v-carve depth from .0625 to .825 and other than removing the 3d image and changing it to just be a flat pocket using 1/4 end mill. I re-calculated everything and saved the g-code out and ran it through OpenBuilds for my g-code sender. However, my v-carve isn’t clearing properly it seems and I’m not sure why. 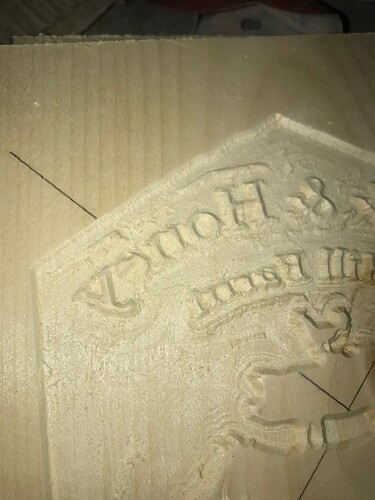 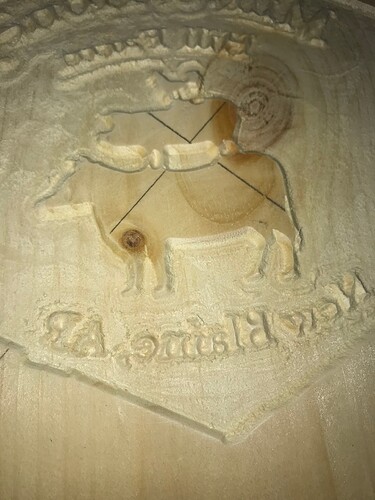 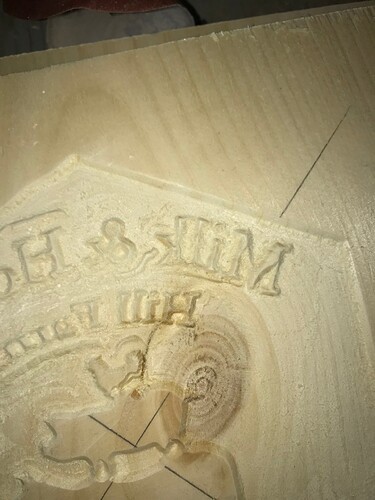 you can see a few spots where there is material left behind although according to the simulation it was all cleared. It also seems to have torn out some of the lettering. Any thoughts? Is it a settings issue? I don’t want to waste to many more boards (tried two different times thinking maybe I goofed up something when I generated the toolpath.

if I need to go deeper, should I look to use a 30 degree v-bit? it seems that going any deeper on this project than .0625 is causing it to tear out more of the lettering. The only real difference in setup is I had to rebuilt my original table I had the silverback on (the table wasn’t very sturdy and wasn’t level), the new table is level and doesn’t move when the machine is running. I’m sure the issue is user error, problem is I can’t figure out what I’m doing incorrectly for it to leave that material behind when it should have cleared it.

Ok, from my experience, first your using pine, spruce or fir. All 3, are very soft woods prone to chip out. I found with softer woods a higher rpm is needed for carving. Not sure of your feed rate but perhaps slow it down with the v bit. Second, in regards to your v bit, make sure you have selected to correct size in your tool path to what you are using, also, it will only go as deep until it thinks the bit will hit the two lines in the pocket. So if your max depth is deeper then when the bit hits two edges it will stop and not go any deeper. Either enlarge your image or use a narrower v-bit. You could actually use an end mill to clear, a large v bit 1/2in x 90 or 60 deg, as a second pass, then do a third pass with a 1/8in 30 deg bit to get your depth.

Hope I covered it all. Perhaps someone with more experience than myself will chime in.

thanks Shawn. Yeah, I can dial back the speed/feed, but still not sure why the carving is leaving parts uncut which should have milled flat (see the photo above where there is some material left around the word Honey, like there was some sort of pathing issue, and then it seems to have cut into the edge of the hexagon in a couple places. it didn’t do this on the first carve i did of this (the same program and machine were used for both including wood from the same pine board. I did one that used the clearance bit and the pathing was all sorts of jacked up, instead of creating a clean line around the hex it chewed into it and look like it crossed paths with some of the vectors, really strange outcome.

If you are doing more than one tool path, make sure to load proper tool path to correspond with each bit, and when doing a bit change make sure to re zero z, apart from that maybe the material moved on the bed if using an aggressive feed rate.

yeah, i ran the clearance toolpath first on the one where i used an 1/4" endmill. I then just tried using the v-bit with the flat depth set to clear out the entire area, so would have only used the one tool path there. In the examples, I had it screwed down and another i had used the painter’s tape with ca glue (used screws on the second one because I thought it had moved). The photo’s above are from the one screwed down so I know it didn’t move. All good suggestions, and ones that make sense to re-validate.

I’ll try another pass with slower feed. what is a good step over for a 1/4" 60degree v-bit? what to make sure it’s not out of whack as well.

my clearance passes for my v bit is 10% and my final is 2%, however, in the tool path creation and best practices I am still pretty new in that aspect.

So looking at this problem still, I stepped back and just did a few simple shapes. I can’t find anything that is loose on the machine, all the bolts are tight nothing feels loose. I will say this, when the gantry changes direction on the Y axis, there is a slight shift where it seems one side of the gantry moves slightly ahead of the other side, but I don’t know if that isn’t normal because I didn’t start paying attention to it till this started happening. It’s not much of a shift and I videoed it but you almost can’t see it on the video that’s how little it seems to move. So looking at my two simple images. One is just a hex carved into MDF using a v-bit with a v-carve tool path and then a profile path with the same v-bit. The hexagon looks like garbage. I then did another v-carve to carve around some letters and gave it a shape to carve out. some of the edges are not straight they are all curvy like the movement along the X/Y axis in a certain direction is all wompper-jawed. This was done with Aspire and OpenBuilds for the g-code sender. I’m running version 11 with the .16 patch of Aspire.

I’m really not sure what to troubleshoot because nothing seems to be standing out as the problem. I will do a test with Easel this afternoon just to eliminate a software issue. But this is frustrating because I’ve got projects I need to be working, but not sure what’s wrong with my system so I can fix it. 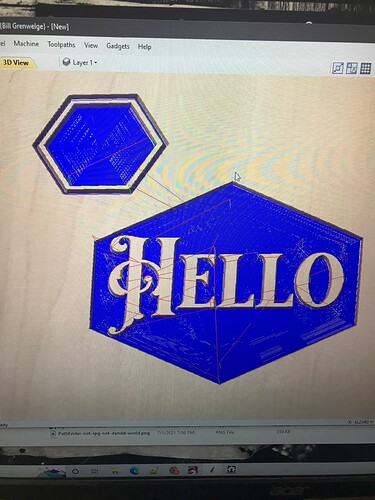 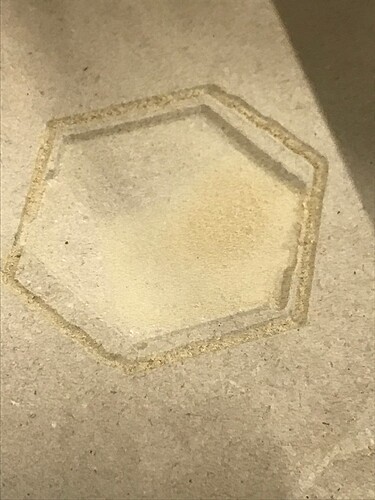 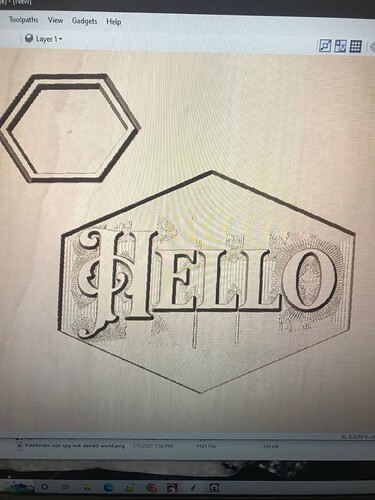 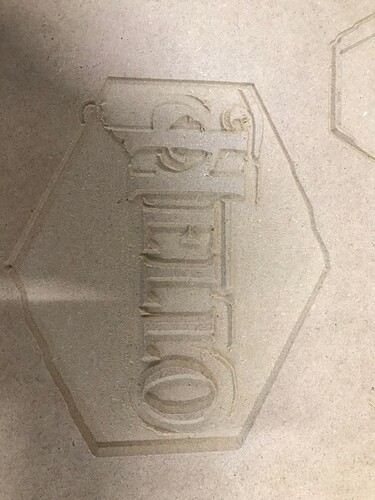 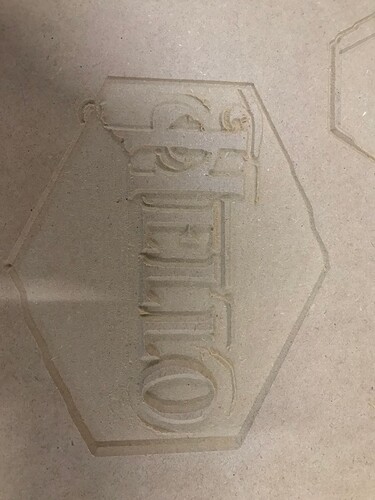 In the images for the text, there is material left around the letters like v-carve or the g-code sender didn’t realize that it needed to be carved out although the simulation in vcarve shows it all cleared out. Something somewhere is jacked and I’m having a beast of a time finding it.

From looking at the photos, there is for sure something loose. In response to your y axis looking off from one another, with the machine turned off, you going to have to measure from edge of the frame to the roller carrier on each side, make sure they are the same distance. If you watched the assembly video I believe that process is in there. Now for the wobbly lines, can you take a video of it carving and producing it, as to me that looks like play in the z axis or movement from the spindle not being tightened enough. Also maybe include feed rates and depths per pass, as maybe there is some bit deflection happening.

So apparently when I setup the machine originally, the table it was not level and out of kilter a bit, on the new table, and I guess I should have measured this after I relocated the machine to the new table, but you were correct on the gantry being of of alignment, it was out by a 1/4" which by eye wasn’t noticeable. I fixed that, the carves are looking slightly better. 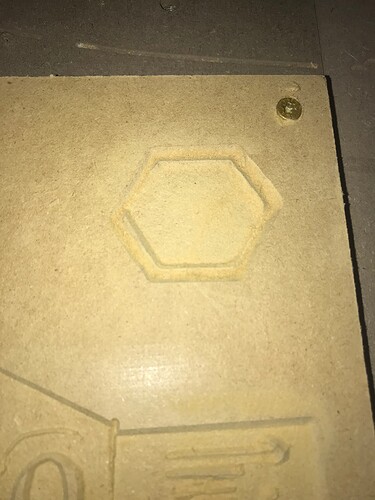 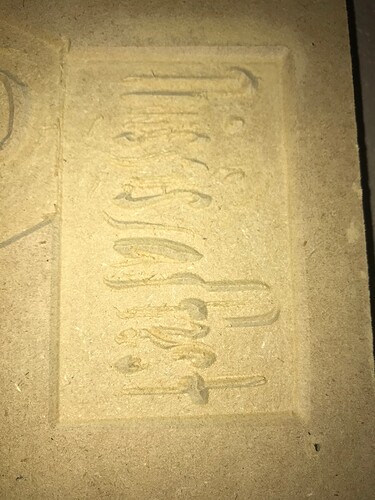 the hex looks cleaner and the line around it is better (not 100% to where I think it should be, still seems the X/Y going from left to right on the angle is still awkward. better than it was, but still seems wonky to me. The text came out better…ignore the poor choice in font for the text. There are still a few minor pieces that it didn’t seem to clear out, but this may just now be a speed/feed/depth tuning issue.

I did check the spindle as well as the Z-axis, both are tight and the spindle is at a 90 degree angle to the bed (checked it with a square). Thanks for the help, Shawn

I would take the time (and I did) to check the gantry rail for level, if it is perpendicular to the bed both, and evenly raised above at least 4 points of the bed. I have approx a 0.01 differeance now that I took the time to do all of that, and my cut throughs, and carves are more even. This is something you have to do with all machines no matter what the price range. But you seem like me, and always are looking for a way to get it that much better. And your willing to put the time and effort in to learn. If you have any further questions, I’ll be happy to help.

One thing to check it you’re seeing out of sync movement on the Y axis - it is possible that there’s a loose backlash nut on the lead screw.

In this pic, it shows the lead screw and brass nuts that provide motion - at the top is the stationary nut, bottom is the backlash nut (spring loaded).

If the screws holding the stationary nut have loosened, it will cause uneven movement on that side.

Can be a bit of a challenge to spot them with the machine assembled, but if you look behind the side plates along the lead screw, you’ll see them.

Look for the brass nut closest to the aluminum block, and make sure the screws are tight. If you need more, we can get those for you. 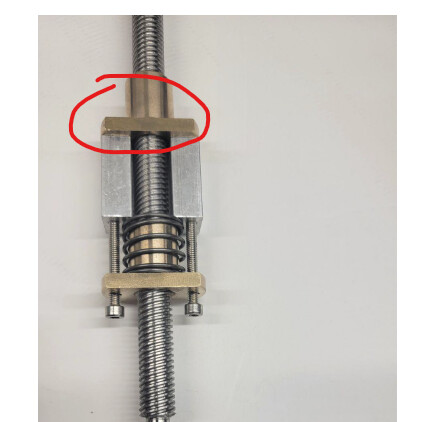 Thanks, Jim, I checked those, they are tight. So now I think it is just fine tuning the bed (check gap between bit and spoiler board to make sure it’s all the same distance. Now that I’ve got the gantry squared back up I think I’m back to where I need to be. I’m hoping to work on some projects this weekend should my main job not suck up most of my weekend.