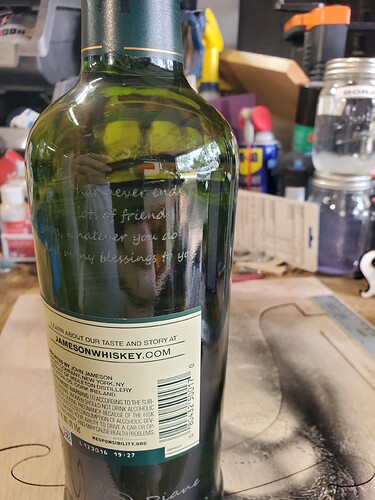 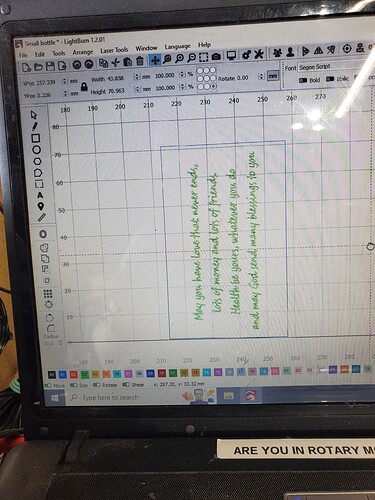 Okay I have a question I created a box, centered it on the bottle just above the label. I then centered the text within the box, framed the box several times to make sure it is still centered. Started the laser and now it is off center. What did I do wrong? The horizontal printer correct, but the vertical didn’t… 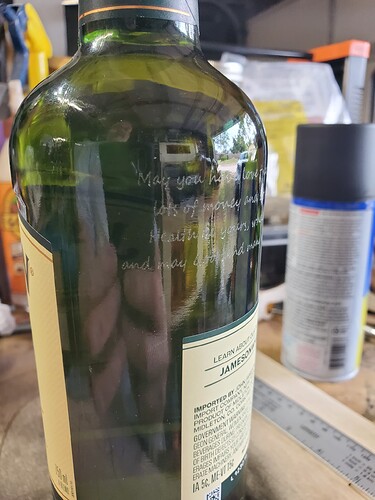 Just to confirm - not any offset in the design, or inadvertently switched between user coordinates/absolute position?

I am not a huge rotary user, hopefully Shawn or Tony may have some additional insight.

I’ve gotten used to closing LightBurn then re-opening it AFTER positioning the laser where I want to set the origin to and then after re-opening I frame once more and then run the job. It’s probably not the right way to do it, but it’s been working going on 3 years now with various laser machines in LightBurn…

I still think as in my response in the lightburn group that your bottle is not rotating with the rotary fully, could be weight related as that bottle looks full also. In addition, having the correct diameter inputed for the rotary is very important as that can skew/distort your final outcome on the bottle. I would like to see this in action, so feel free to reach out to me on facebook, in the group or on messenger.

But wouldn’t the wording be distorted if it wasnt rolling probably?

I think your slippage occured when it moved to its starting point to be honest, not so much while engraving, but as I said i would have to see how you set it up before your start your burn.